There is little mention of the area now known as Fraser until the second half of the 19th Century. Macomb County was growing; Mt. Clemens, Romeo and Utica had been established. To make travel easier, the Detroit Erin Blank Road Company began to build Utica Plank Road (Utica Road) in 1851 from the Gratiot Turnpike to the City of Utica. This is really the beginning of the crossroads community that became Fraser.

In 1858, the Chicago, Detroit and Canada Grand Trunk Junction Railroad Company purchased their right-of-way through Fraser, and a depot was later built on what is still called Depot Road. These two factors, the Utica Road and the Railway Depot, created a crossroads community that grew into a village and center for commerce in the immediate area.

Drawn by the commercial prospects of the area, a Detroit lawyer, Alexander J. Frazer, came to this area in 1857 or 1858. His father, also a lawyer, was a prominent figure in Detroit. He purchased land in Fraser in 1858 near the Grand Trunk right-of-way. He plotted a subdivision and may have built some houses. It is also possible he built and perhaps operated a hotel near the depot. Between 1860 and 1870 various pieces of this property were sold. After 1870 he apparently no longer lived in the village. He drowned in Detroit sometime during the year 1871. The village was named after him.

A community cannot be created without people. In the early 1850’s many German immigrants were coming to the United States seeking land and political freedom.
Original Baumgartner House
These settlers were, on the whole, more prosperous than many of the other immigrants. They were able to move across the continent to settle in the newer territories. Many of these people came to Michigan and to Macomb County. Some of the first German settlers were George Fleischut, John Oehmke, Justus Wormsbacher, Christopher and Sophia Arnes, Henry and Theodore Rattman and Fred Eberlein. A blacksmith shop was established by Fred Eberlein in 1856; it was the first business in Fraser.

A barrel stave mill was build by Fred Eberlein in 1865. The mill passed through various hands. In the 1870’s it was owned by Charles Knorr and Charles Steffens. A Macomb County history written in 1882 credits the Knorr and Steffens Mill with being one of the finest woodworking mills in southern Michigan.

The first postmaster of Fraser, Leonard Scott, was appointed in 1860. Later in the same year, David McPherson, was appointed to this post and the town’s name was changed to McPhersonville. In 1863, the settlement’s name was changed back to Fraser. During the later half of the last century, the town grew slowly. It was largely a German farming community. It had an industry, a railroad station and a busy road.

It also had churches and schools. The Germans who settled in the area were Lutheran. Actually as early as 1852, a minister, Reverend John Winkler, received land for a church, school, parsonage, and cemetery. This is the present site of St. John’s Lutheran Church. The property was not used for that purpose immediately.
There was a Lutheran Church at Utica and Fifteen Mile Road called the Buffalo Church after the synod of that name. In 1864, some members of that church established the present St. John’s Church. In 1884, the present church building was constructed.

In 1894, the Village of Fraser was incorporated by an act of the state legislature. The first officers of the village were Charles Steffens, president; George Steffens, clerk; Henry Dostzer, treasurer; Leonard Schneider, assessor; Charles Klein, Fred Duchlow, Fred Toella and Fred Eberlein, councilmen. The new village had a population of 230. According to the 1895 Macomb Country Atlas, Fraser had several stores, a post office, town hall, a blacksmith shop, a hotel, the stave mill, a cigar manufacturing company, a church and school and the railroad depot.

In 1905 a fire started at Fourteen Mile and Utica Road, destroying several stores and buildings in the area. The State Bank of Fraser was established in 1910. Charles Berg, George Steffens, and Henry Bohn were early presidents of the bank. In 1930, the present building was erected at Utica road and Fourteen Mile.

There was some confusion about the spelling of the village’s name. When the village was incorporated, the name was listed as Frazer. In 1928, the residents voted to legally change the spelling to Fraser.

The village grew slowly during the first part of the century. The new residents of Frazer in the 1920’s were largely of Belgian descent, moving out of Detroit to find more land for truck
gardening. The Van Marcke’s and Van Thomme’s were among those coming to Fraser at this time.

In 1928, Walter C. Steffens, Village President and member of the County Plat board suggested and promoted the construction of Groesbeck Highway, named after Alex J. Groesbeck, then State Governor. This has been an important factor in the growth of Fraser.

In 1929, a new charter was adopted by the voters of this village providing for a commission form of government. Walter C. Steffens was the first president.

In 1940, the population of Fraser had only grown to 747. During this year, the village obtained the land at Garfield and fourteen Mile that is now the Municipal Park.

In 1956, the population of the village had grown to 3,363. The village could now become a city. In the spring of that year, one square mile of the former Erin Township was annexed to make the present size of the City of Fraser – four square miles. In December of 1956 a new City Charter was approved, and in January of 1957, Fraser became a city. The property that was annexed includes many manufacturing shops and companies along Groesbeck Highway.

Especially during the 1960’s, the population of Fraser grew rapidly. Many new homes and businesses were built. The population grew by 68% in the decade between 1960 and 1970. After nearly a century of slow growth, Fraser’s citizens and industry have combined to create a rapidly growing, balanced community. 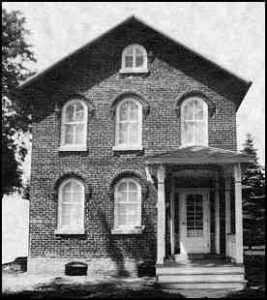